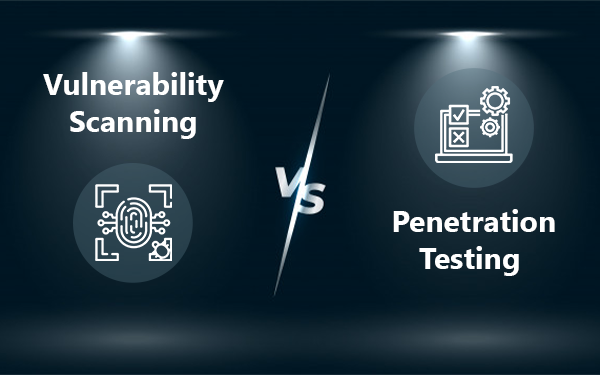 Vulnerability scanning and penetration testing are the two most confusing terms of the same service. However, both serve crucial but different functions necessary to protect the entire ecosystem of networks in an organization.

But, the problem arises when business owners use one when they need the other. Thus, they miss on the vital elements of a secure network.

In this blog post, we will discuss different aspects of vulnerability scanning and penetration testing. It will help you clear the confusion between the two and make things simpler and easy to comprehend.

What is Vulnerability Scanning?

Vulnerability scanning is an automatic process of identifying the vulnerabilities related to the security of networks and applications. It is professionally done by the designated IT department of any organization or hackers. He checks the entry points into an organization’s network.

In the vulnerability scanning, all the network ports, password breaches, and suspicious applications are being scanned with the help of scanners configured for the same purpose.

The scanning process involves various techniques that are used to check the response that a device, network, or application gives within the target scope.

Based on the output from the device, the scanner tends to match the results to the database and assign risk ratings accordingly.

This way, the scanning services tend to point out needed security fixes, missing service packs, coding flaws, or other malware.

Vulnerability scanning has its own set of benefits that help organizations identify and quantify security vulnerabilities. Some of them are mentioned below, let’s have a look:

Penetration testing or pen testing is a simulated cyberattack on your organization’s network or application, and thus, it is called ethical hacking.

Ethical hackers tend to check for exploitable vulnerabilities in a targeted network or device. They scale planned attacks against a company’s network infrastructure as a part of a holistic security strategy considering the network, device, and web apps.

The pen testers use specific tools and techniques that cybercriminals use in common to check the impact that an attack may leave on the business.

It helps pen testers and organizations to understand whether the system is robust enough to resist an attack from various authenticated and unauthenticated sources.

Considering the insights received after a planned attack, the security policies are upgraded and are used to fine-tune patch-detected vulnerabilities.

Organizations generally have software and systems from the beginning with the objective of eliminating security flaws. Still, a penetration test is worth the try because it gives you a clear picture of how well you have eliminated security issues. Moreover, it comes with great benefits, out of which some are mentioned below.

Let’s have a look at them:

What are the Key Differences Between Vulnerability Scanning and Penetration Testing?

Vulnerability scanning and penetration testing are commonly used in the cybersecurity space to protect data, reputation, and revenue against security threats.

However, both these terms are often confused with each other and misunderstood. But they are different from each other.

It is best to perform vulnerability scanning at least once in three months. However, if you are looking forward to making some major changes in the network infrastructure then you may need it on a monthly or weekly basis.

Penetration testing depends on the type of test you are conducting in the organization. Usually, there are two broad categories of pen testing: internal and external testing.

Most industries require both and should be performed on a regular basis. Since it is a planned attack it requires time and resources, thus we would recommend you to conduct penetration testing at least once a year.

When it comes to cost, you will find various pricing models that depend on the package that a vendor offers. Moreover, the environment in which vulnerability scanning is conducted also adds up to the cost.

On average a vulnerability scanning can range from $2000-$2,500 considering the above factors and the number of IPs, servers, and applications to be scanned.

On the other hand, the cost of penetration testing majorly depends on the goal of the test as it will influence the tools, time, and resources to be used.

The reason is that the goal may double the tools and software to be used which eventually adds up to the overall cost of the exercise.

Vulnerability scanning can be automated and can take up to 20-60 minutes that depends on the number of IPs to be scanned. And, web scans may take up to 2-4 hours to complete.

As we discussed above, penetration testing is a complete simulated cyber-attack using similar tools that a hacker would use, it takes more time as compared to vulnerability scanning.

It may take up 1-3 weeks depending on the number of systems tested. However, if you are testing an individual app, process, or system it will take less than one week.

If we talk about the regulation requirements, then vulnerability scanning has to comply with specific standards that majorly include PCI DSS 11.2.

Vulnerability scanning uncovers exploitable vulnerabilities either within the network or outside the network. On the other hand, penetration testing gives you complete visibility of situations a malicious entity may cause damage or attack the system that gives a clear picture of the extent of risks associated.

Vulnerability Scanning Vs Penetration Testing- Which is Better?

Vulnerability scanning targets the known vulnerabilities and can be considered a good practice. But, it cannot give the full visibility of threats that exist in your device, applications, or network.

However, penetration testing shows the real-world attack vector as to how it will impact an organization, assets, data, humans, and physical security. Moreover, it gives you a complete picture of how effective your existing security controls are against the evolving cyberattacks.

Well, penetration tests can be expensive but are worth the effort because you are letting a professional examine every nook and corner of your entire network infrastructure. This shows that there is no possibility of compromise.

Here you will get penetration testing experts who will give you a complete report of risks, considering those you can begin preventing and responding to cyber threats.